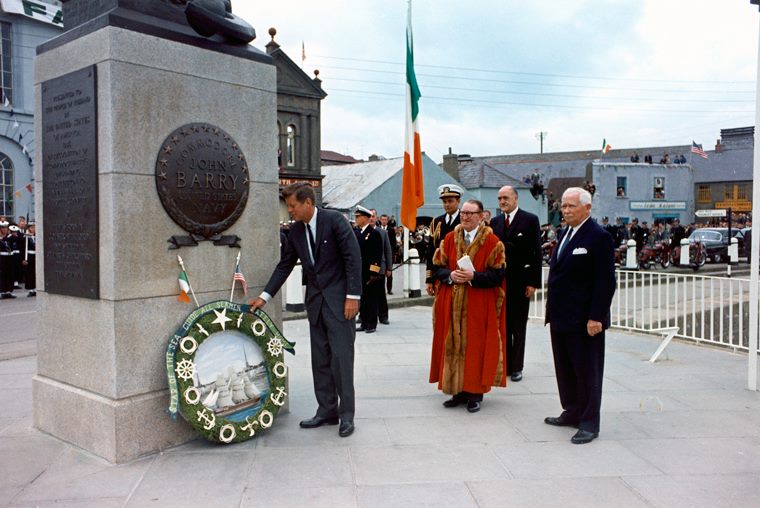 Captain John Barry: An American-Irish Naval Hero and “Father of the American Navy” – By Daniel Sheridan

On June 27, 1963, President John F. Kennedy laid a wreath at the memorial to the Revolutionary War hero, John Barry, of Wexford, on the first full day of his visit to Ireland. Who is John Barry?

The British Navy dominated the seas in the 1770s. During the Revolutionary War, the American Navy was no match for them. But private ship owners bravely filled the gap. Congress granted them the authority to “distress the enemies of the United States by sea or land.” Their pay consisted of war spoils. These patriots sailed up and down the Atlantic, destroying hundreds of enemy ships. Massachusetts and Pennsylvania alone employed about five hundred ships in this service.

Historians have singled out John Paul Jones as the “Father of the American Navy.” However, thousands of other seamen fighting for American Independence were just as patriotic and accomplished as Jones, but Jones got the most press. One man’s story demands our admiration.

Outside Independence Hall in Philadelphia stands the statue of John Barry. Captain Barry, a native of Ireland, was born in Wexford in 1745. When the war for Independence broke out, he willingly offered his services to his adopted country – the new United States. Barry’s exploits were terrific. He cruised up and down both sides of the Atlantic, engaging the British in fierce battles. He lost a few ships and was wounded in action more than once, but he continued to fight and captured many prizes.

The British, unable to beat Barry, tried to seduce their former citizen to switch sides with an offer that most men wouldn’t have the virtue to refuse. They offered Barry $100,000 cash and the command of a frigate in exchange for his loyalty. Think about how much money that was in the 1770s. What would you have done? Here’s what Barry did. He replied without hesitation and indignantly:

“Not the value and command of the whole British fleet can seduce me from the cause of my country!”

Barry was a faithful and virtuous Patriot from the outbreak of the war till its glorious end; he even fought in the last naval battle. His service extended beyond the war, too. Barry helped establish the newly formed government under the Constitution when President George Washington appointed him Captain in the freshly reorganized Navy. He oversaw the construction of the famous frigate “United States” and took command of it when put to sea. Additionally, the Captain defended his country in the naval war with France from 1798 to 1801. He continued to assist his country in other capacities until he was too ill to serve, an illness that took his life.

Captain Barry died on September 13, 1803, in Philadelphia. People said, “Barry was noble in spirit, humane in discipline, discreet and fearless in battle, urbane in his manners, a splendid officer, a good citizen, a devoted Christian, and a true Patriot.”