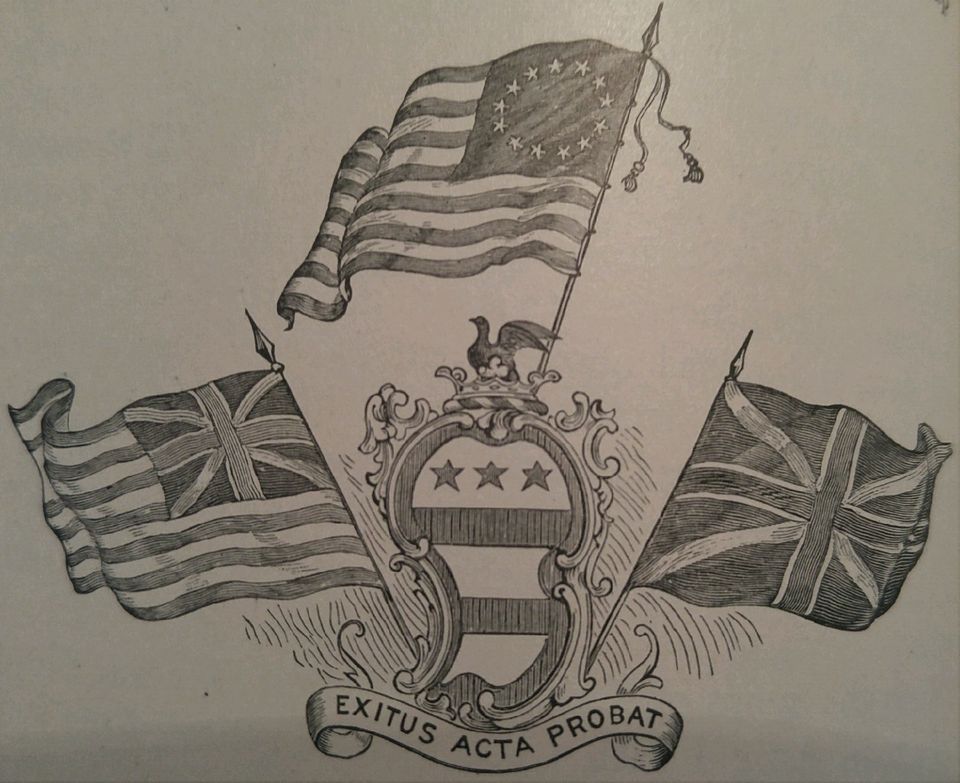 Happy #FlagDay! Do you know the story behind the flag?

The Story of the First Stars and Stripes – By Daniel Sheridan

#OTD, June 14, 1777, the Continental Congress authorized the “stars and stripes” flag for the new United States.

On the right of the provided photo is the British Union Jack with the red cross of St. George and the Scottish white cross of St. Andrew. General George Washington used the flag on the left at Cambridge in January 1776. The flag in the middle, our “stars and stripes,” was adopted by the Continental Congress on June 14, 1777, when Americans exchanged the British Union for a Union of 13 States, symbolized by white stars on a blue background. Below the center flag is the Washington family coat of arms with a Latin phrase meaning, “The event justifies the deed.” The “Stars and Stripes” now represented the United States in their struggle for freedom, and it flew for the first time on August 6, 1777. Here is how that story unfolded.

On August 3, 1777, British Colonel St. Leger, leading an expedition consisting of Loyalists and Indians, laid siege to Fort Stanwix, a log fortification held by two New York Regiments. The American patriot, General Herkimer, knowing the Americans couldn’t hold out for long, raised a militia of 800 men and went to the aid of his fellow patriots.

Herkimer and his band, however, were ambushed Near Oriskany, New York, by the Mohawk chieftain, Joseph Brant. The battle was gruesome. Militia, Royalists, and Mohawks became so intermingled that the fight turned into hand-to-hand combat, men wrestling with bayonets, hatchets, and hunting knives in hand. Many souls fell in the forest “with their left hands clenched in each other’s hair, their right grasping, in a grip of death, the knife plunged in each other’s bosom.” As he lay dying from a mortal wound, General Herkimer continued to encourage and command his men until his last breath.

The battle still raging, men from the American garrison executed a daring move that successfully drove the enemy away. The Patriots, having heard of Herkimer’s fate, returned to the fort with prisoners, spoils of war, and five enemy flags.

The garrison didn’t have a flag when the battle began, but soldiers improvised one on the spot upon their triumphant return. They cut up white shirts to fashion the white stripes, the red from pieces of scarlet cloth sewed together, and the blue background for the stars from a coat. Historian John Fiske describes the scene:

“This rude flag, hastily extemporized out of a white shirt, an old blue jacket, and some strips of red cloth from the petticoat of a soldier’s wife, was the first American flag with stars and stripes that was ever hoisted, and it was first flung to the breeze on the memorable day of Oriskany, August 6, 1777.”

“It was the first time that a captured banner floated under the stars and stripes.”

That’s the origin of the American flag.